Man is becoming increasingly complex in how he/she investigates our universe and it seems like robotic explorers are on the forefront of  this exploration.  The days of the static landers (Viking) are over, and the days of truly durable, and somewhat intelligent, robots are here.  The Mars rovers (Spirit and Opportunity) had to not only land safely, but also to navigate rugged terrain.  Those rovers were "kicking" years longer than anyone ever expected.  The lander that set down on Titan (Cassini), one of Saturn's moons, had to be able to float in the event it touched down in pools of ethane.  Who knows what the next generation of planetary explorers will bring!

Here’s what your students had to do to make their planetary explorer...  Students work in teams of up to four people.  These team mates may construct their Planetary Explorer from any materials found around the home, with a few guidelines…
Rule #1: No explorer may be under 100g
Rule #2: The explorer must be constructed from materials that were not originally used for the purpose they fulfill on the vehicle. The only exception to this rule is for wheels, axles, motors, and frames.  All other attachments and body work must be original in their design.

This vehicle, once built,  will have to run an obstacle course (point value=cm/s), climb hills (point value=degrees x 10), push mass(point value=mass/3), fight other cars(point value =100 per win), and can optionally compete in the float and drop bonus events (point value= +200 per).  The points scored n each of these events will be divided by the total mass of the car.  This Overall Performance Ratio (OPR) will determine the winners!  This means that you better find a good balance between performance and mass!  An OPR of under 1.2 pts/g is a 3, an OPR between 1.2 and 1.49 is a 4, and an OPR of 1.5 or over is a 5.

PARENTS: This project is meant to low, or no, cost!  $6 RC cars fare FAR better than $100 or $300 cars.  This is not about being the fastest, it's about engineering and efficiency.

The Current World Records:
The Crater Climb Event: It was set in 2006 by team “Border Patrol” and tied in 2008 by team "Cheezit Munchers" is 54 degrees!
The Speed Event: This was set in 2008 by team “Tango” is 426.6 cm/s
The Push Event: This record was set in 2009 by team “World Domination” and they pushed 4318g
Because of the nature of the Fight Event the number of fights can vary from class to class.  Champions in the fighting event typically score around 5-7 wins.

The Highest OPR scored came in 2009 by team "Tiny but Mighty" and was caluculated at 8.275pts/g

They're probably movies you'll never get to see, but these are a few of the potentially awesome movies that my students could dream up using our vocabulary concepts!

For current movies with insultingly stupid physics, check out this website
http://www.intuitor.com/moviephysics/ 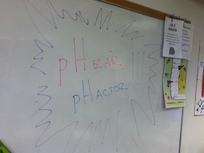 In this lab three brave students went head to head to try and identify up to 18 different solutions!  Blind folded and only armed with their tongues, the following pictures will give you a sense of the sweetness of victory and the bitterness of defeat.  Meanwhile, the rest of the class recorded the pH of the solutions and then color coded the data in red, blue, or green.  Last, we looked for trends in the data we collected.  One example of these trends was that many of the edible solutions were in the red range (and acid).  The next day we followed up by testing the household solutions that the students brought in and we started to see the trends in edible vs. non-edible solutions and what pH means to our lives.